The Airwheel was shown and caught the eye at the Crimea Travel Industry Exhibition held from March 4 – 6 in Ukraine. The Airwheel is confident about the future of self-balancing electric unicycles. The overseas market of the Airwheel is expanding in a rapid speed since it launched the overseas strategy. From March 4 to 6, the Airwheel was shown at Crimea Travel Industry Exhibition and won great attention.

Crimea is a major land mass on the northern coast of the Black Sea that is almost completely surrounded by water. Most of Crimea has a temperate continental climate, except for the south coast where it experiences a humid subtropical climate, due to warm influences from the Black Sea and the high ground of the Crimean Mountains. Crimea possesses significant historical and natural resources and is a region where it is possible to find practically any type of landscape; mountain ranges and plateaus, grasslands, caves. According to National Geographic, Crimea was among the top 20 travel destinations in 2013. 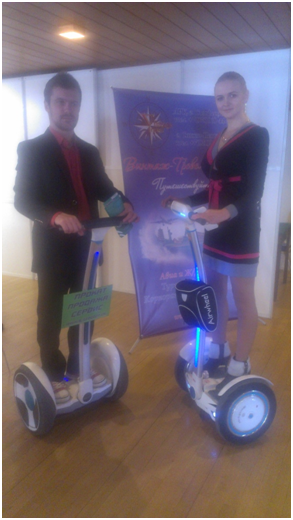 One of the newly launched model the Airwheel S3 successfully caught the attention by visitors at the exhibition, where many interested customers stepped on the smart vehicle and took a try by themselves. The S3 is a self-balancing electric scooter that requires zero balancing skills. Riders can go at their expected direction as they wish. Based on the gyro technology, the Airwheel S3 can keep itself balanced. It is geared with a Japan-made battery that is powerful enough to scoot for at least 10km on a single charge. What’s more, it weighs merely 25kg being the best choice for short distance travel or commuting.

In fact, many scenic spots have make the Airwheel S3 as a patrolling tool. In the near future, the self-balancing electric scooters will be an integral part in travel or people’s daily commute.