The Blinding New Airwheel Products Are to Change People's Lives

Abstract: 2016 is a bumper year for Airwheel as a bunch of new products have totally changed the stereotypes of Airwheel and opened up a new section, such as Airwheel C series of smart helmets and F series of drone with camera that was released on the CES, held in Jan 2017.

Known to all, Airwheel is not only devoted itself into producing eco-friendly vehicles, like E series of folding e bikes and R series of electric moped bike, but also aims to improve people's living standards. 2016 is a bumper year for Airwheel as a bunch of new products have totally changed the stereotypes of Airwheel and opened up a new section, such as Airwheel C series of smart helmets and F series of drone with camera. Here are some Airwheel representative products.

M series—electric skateboard
Many are fond of skateboarding at a high speed and use different tactics to chase passion and entertainment, but riding the traditional skateboards is exhausted and dangerous. Airwheel M3 self-balancing air board makes the public's skateboarding dream come true. As a powerful skateboard with clean lithium battery and customized tire, M3 can conquer any terrains, so users can skateboard to anywhere they want safely. 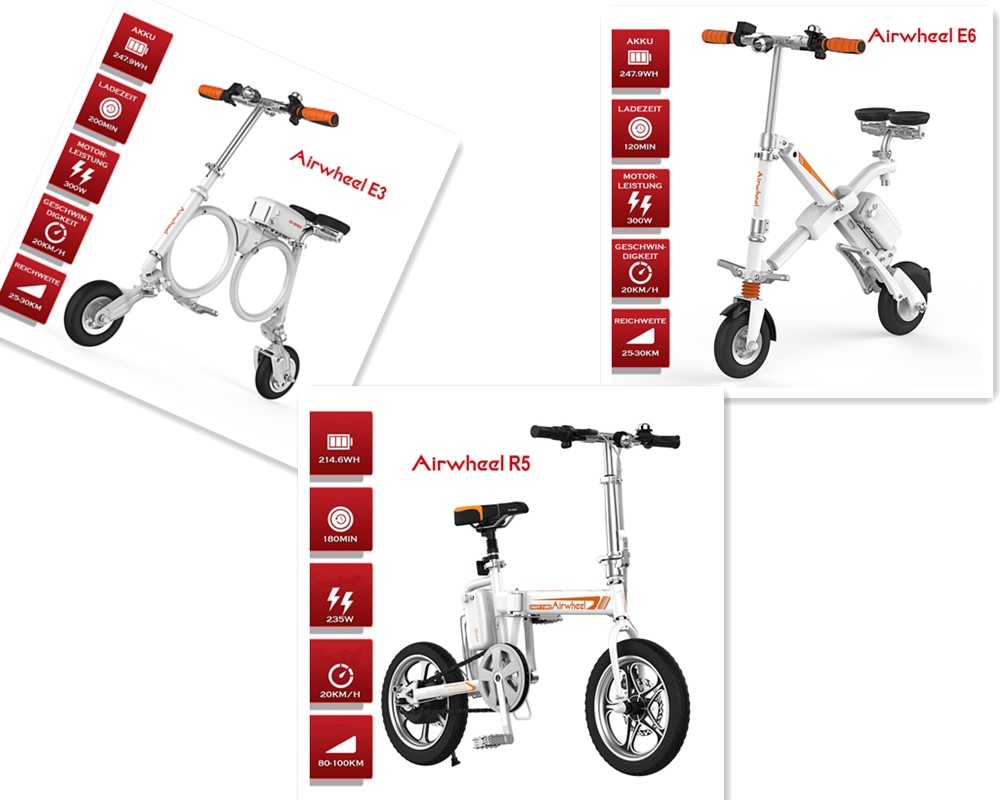 E series and R series—citizen e bike
Airwheel smart e bike provides the public a more flexible and agile riding experience, by outfitting with the exquisite foldable design. Though they have mini body, their battery and motor powerful enough to easily conquer any terrains and riders will never be worried about running out of electricity with the swappable battery design.

C series—intelligent helmet
Airwheel C5, C6 and C8 give people a new vision towards helmets. They have much in common and meanwhile possess their own features. All of them are equipped with camera with 2k resolution, Bluetooth to listen to music and speaker to answer phone. Also, after connecting to the mobile App, they can control the video, take pictures and retrospect the wonderful images. However, they designed for different groups. If we say the C5 is born for the masses, the C6 is for motorcycle riders and C8 full face helmet for racers.

Together with the F series of unmanned aerial vehicle, Airwheel is going to change people's daily life comprehensively.