Airwheel S3, Be Your Alternative Transportation

The Airwheel S3 is one of the most praised models launched by Airwheel Technology last year. As a twin-wheeled self-balancing electric scooter, the most obvious feature of the Airwheel S3 is its wide standing platform and a long control shaft. It may look a bit different from an electric unicycle, but it really is a self-balancing scooter that based on the gyro principles exactly as Airwheel’s other unicycles do. The Airwheel S3 is designed with a standing platform meaning that it is super stable and can greatly shortens the learning curve for beginners. The Airwheel S3 can be an alternative to traditional transportation such as bikes and cars. It even fits children and old people who have relatively weak balancing skill. The operation of the Airwheel S3 is almost the same as Airwheel’s other unicycles with the only difference being that riders should use the control shaft to take turns rather than tilting sideward.

Airwheel S3 has many unique advantages than other models. It has LED flash lights to keep you visible at night. It’s also equipped with a 4-inch LED panel which shows battery, speed, temperature, and other information. The S3 model can cover an unrivalled range of 36-40 miles on a single battery charge, and is easy to use for all! All you have to do is to hold on to the handlebar and lean in the direction you wish to go! The dual-wheeled S3, compared to single-wheeled units, is more stable and hence much easier to control. The anti-collision design at the back of handlebar minimizes potential impact caused by scratches and collisions (though it’s unlikely to fall from S3). 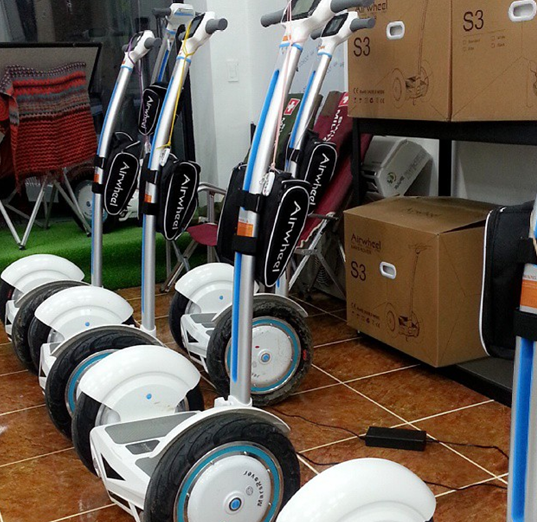 In addition, the latest Airwheel S3 comes with fully sealed circuit boards. No matter in the rain or muddy terrains, just ride along without worrying about water leakage. It is worth noting that the Airwheel S3 has a removable handlebar, signal and brake lights, and it is also equipped with dual Bluetooth speakers which you can control remotely.

With more attentions are paid to protecting the environment, a low carbon lifestyle is advocated by the governments of many countries. In such case, the Airwheel S3 can be the optimal choice for those who live in the cities. It’s both fun and environmental-friendly.