The Airwheel Q5 is a dual-wheel self-balancing electric unicycle with an upgraded gyro system and a more streamlined design. I decided to buy a unit for myself after viewing the comments on this electric unicycle. When I opened it, it was well packaged and just as described. I expected to handle it easily, but it turned out I had trouble getting up on it. The Airwheel Q5 got out of control when it slipped out from me a couple of times. I wrapped it with duct tape for the learning period. 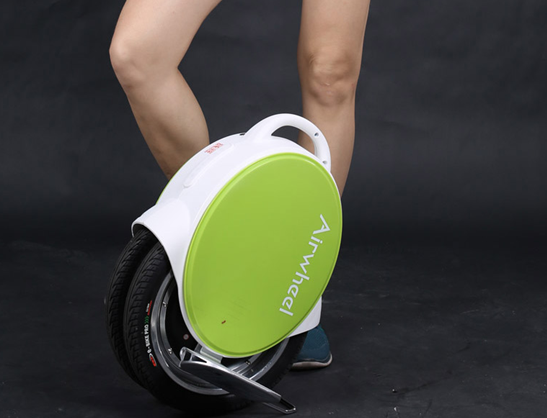 The Airwheel Q5 has a beautiful design and I chose the apple green version. But I discovered that the LEDs for the power indicators are described as green in the manual. However, when I turned the wheel on, I found the lights were red. Not sure if red meant “discharge”, I e-mailed the company and I promptly got a reply that the lights are supposed to be red.

My nephew was visiting from Sweden two days after the Airwheel Q5 arrived. Just within minutes he was riding all over the property. Watching him gave me confidence I needed and helped me a lot just watching him go around the property. I have an instinctive shyness of falling down, so I was a little bit more conservative. But within a few days I’ve been able to ride all over the neighborhood, and on city streets without problems. The unit goes up and down hills as easily as riding level. One’s body seems to instinctively adjust your speed.

I found the battery was quite powerful. It covers a range of at least a 5 mile radius of operation and I want to try for perhaps 10 miles. The Airwheel Q5 is compact and weighs 22 pounds. It is lightweight, nevertheless it would be quite tiring if you need to carry it for a long distance. So better ride it than carry it. I’ve now had the unit for a month and I still love it. Later I discovered that Airwheel Q5 is equipped with the injury precaution system. When the wheel tilts at over 45 degree sideways, the control system will activate tilting protection. The motor will stall immediately to prevent injuries. When you ride too fast and exceed the maximum speed (12km/h) set by Airwheel Q5, the front end of the treadle will rise gradually and when the speed exceeds 16km/h, the foot pedal will stop you inclining further to accelerate. When there is 10% battery left, the wheel will continually beep to indicate the battery is low and for you to dismount.

Previous：Airwheel's Core Notion About the Self-balancing Scooter
Next：Airwheel Q3, something to award yourself at the end of this year