Abstract: The Airwheel was features in a TBS program of Japan. The Airwheel is fun, portable and powerful, being the optimal choice for people to get around and to challenge the old ways of transportation. 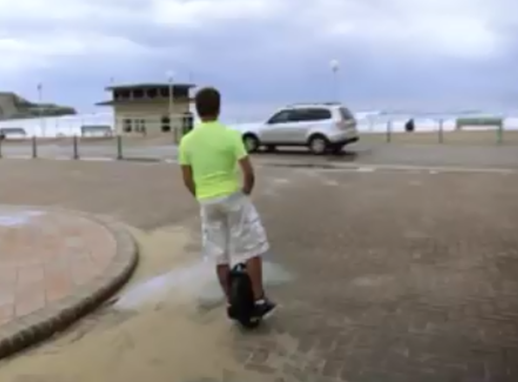 Recently, the Airwheel was features in the Japan’s TBS program “& Happy” shot on Bondi Beach, Sydney. In the program, Roman Juskey is featured showing his skills in riding a smart device called the Airwheel. Roman are seen riding the wheel flexibly and swiftly. It looks pretty fun in that Roman is almost floating literally on the ground. Roman says that he came across the Airwheel accidently on the Internet and fell in love with it immediately. He likes to ride the Airwheel to conquer new territories and himself as well. He also said that being active and challenging is fulfilling himself.

You might be very curious about the portable device. The Airwheel may give you an impression as a unicycle. But actually the Airwheel is a gyro-stabilized unicycle with a built-in electric motor. It is compact and fun to ride and is intended to be used as you would use an electric bicycle. Riding the Airwheel is simple. You don’t need to be an expert as you simply need to step on it and remain calm and stabilize yourself before you start moving. This vehicle should be able to fit the average and slightly fatter body size. Unlike the unicycle models, all you have to do is to lean your body forward and backward to maneuver its motion and direction – push to accelerate and pull to slow down – it’s just that simple. Currently, the Airwheel offers three series, namely Airwheel X, Airwheel Q and Airwheel S, each with unique features. The Airwheel X series has a single wheel which makes for a playful fun ride. You’ll get a hang of it after a days practice. The Airwheel Q series has dual wheels which allows for a more stable ride than one wheeled models. Most people manage to drive it in 5 minutes. The Airwheel S series is a full functioned design with a wide platform and a long handle bar for users to comfortably stand and hold. In addition, the S3 comes with built in speakers, wireless Bluetooth connection, a display screen and 2 remote controls. The display shows the battery life, speed and miles achieved. The remote controls the head lights and power. All Airwheel models have safety systems: there are LED lights indicating battery level. When battery gets below 15% the Airwheel will start beeping and will lean backward to slow down and stop. When it falls over 45° it will turn of the engine and beep.