Abstract: Here’s an Airwheel X5 review from a buyer. The Airwheel X5 belongs to the Airwheel X series featured with single wheel. Single-wheeler, though relatively harder to learn, is agile and enjoys greater maneuverability.

The Airwheel X5 is robustly packaged. I unwrapped and unpacked a charger, an IEC with UK power plug, the stabilizer wheels and strap you use when you first start, a manual and lastly, a tyre pump extender thing, which you use, with a pump (obviously), to re-inflate the wheel as it goes down over time or you want to change the feel of the ride. Packed that away somewhere very safe.

Very pleased to see that the tyre came ready to go, as did the battery, which was sensibly 3/4 charged straight out of the box! Bonus. So on went the stabilizers as recommended by Airwheel’s “Learn to ride” video, and outside I went to see how doable this whole thing is going to be.

Here’s the specs for the whole Airwheel X and Q (double-wheeler) series. You can see my X5 between the X3 and X6. I chose it because it gives a challenge to learn (1 wheel) and is greater range and power for the same carry round weight as its younger brother the X3. The only payoff for that greater range is half an hour’s recharge time, which I considered not even an inconvenience. A week on, I still think I made the right choice, though if pushed, might appreciate a wee bit more power for uphills, so could have gone X6, or even X8 had money been no object. But it was, so an X5 was, and remains fine :)

Ok, glide, but you know what I mean. It does feel a bit like flying. And you’re about 8 inches taller than everyone else when on it, so when you can perfect your technique, you can really rather float along like a sort of overseeing angel! That very much appeals to me for some reason. Less helpful if I’m ever an assassination target. 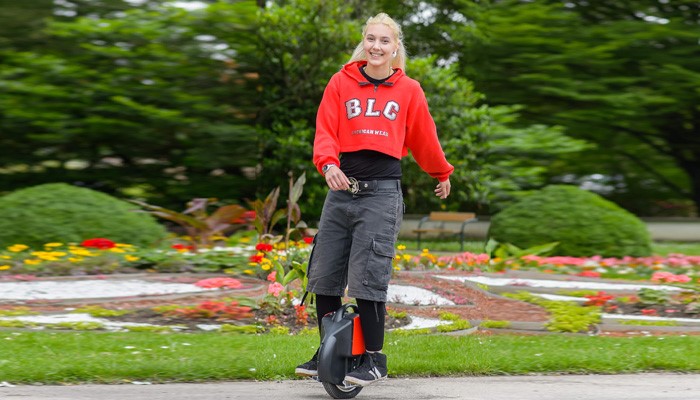 After a solid 3 days of practice I feel I know the Airwheel X5 and its characteristics a little bit better. The first question to ask, surely, is do I, at this point, think 500 watts is enough power and 12 mph enough speed? Yes. At the moment, I do, and that speed is perfectly fast enough for the moment. For now it’s too fast if anything! I suspect that won’t always be the case as I eventually become proficient, but if you want a pedestrian-area-legal vehicle, that’s what they’re all limited to, with the exception of the Rockwheel, which doesn’t have a limit at all, but you can’t get easily get on those over here in the UK, or use it legally in pedestrian areas if you do pay the massive 26% import duty to get it in from the State. To be fair, even 10 mph (roughly double walking pace) feels pretty fast if you’re in an open vehicle and close to the ground.

Previous：What Shall We Do for Facing up to the Era of Electric Self-balancing Scooter
Next：Airwheel: A Hands-free Alternative to Bikes and Cars