Office workers account for the majority of those taking buses and subway every day. Every time during the peak hour, you’ll find the buses are all packed up. It’s really uncomfortable and annoying especially in summer when the temperature jumps high and it smells bad inside buses. Is there any solution to this embarrassment? Yes, the Airwheel self-balancing electric scooter has good news for you. With the urban population grows ever larger, the city becomes more and more crowded. Traffic jams become a headache for many commuters and all kinds of campaigns are called on to combat pollutions. People are suggested to take buses instead of driving cars to go to work. However, the crowded buses are far less comfortable than private cars. Especially during the summer, the odor of sweat in buses will deter many commuters.

Besides, buses can also be inconvenient sometimes, especially when your working place is not far from your home and you have to waste a long time in just waiting for the bus. In this occasion, the Airwheel can be a good help for you. You just have to step on your Airwheel and within minutes you are there at your office. 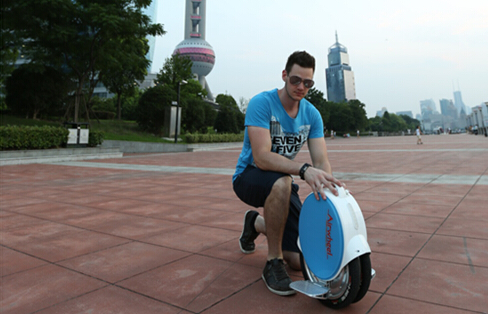 Unlike a bike that you have to leave it downstairs when working, the Airwheel unit is portable and relatively not heavy that you can carry it to your office and stow it under your desk without taking much space. The Airwheel electric scooter can roll with an average speed of 18km/h. It is much faster than walking, though slower than a motorbike, which is enough to meet the requirements of commuters. In addition, by riding an Airwheel, you are flexible to choose your route, meaning that you can cut corners to both avoid crowed roads and save your time.

There are now three series of Airwheel available, catering different needs. For every model, customers also have some color options to choose. There are even music versions of Airwheel for those used to listening to music while riding.

With Airwheel self-balancing electric unicycle, commuters not can save their time on the way and have more time to sleep, but can as well enjoy the fresh air, birds’ twitter and fragrance of flowers. So why not get yourself an Airwheel now?