Abstract: Last month, Airwheel new product release conference has published two new arrivals, which are A3 and S5. The latter has gained lots of praises from the mass of consumers, because it sends out a strong sense of wildness and nobleness. According to the feedbacks from general consumers, Airwheel S5 enjoys a bright market prospect.

Nowadays, traveling around the city at weekends has become the mainstream leisure form of many people. However, driving a car may be restricted by serious traffic jam. What’s worse, parking is also a trouble. Riding bicycle is economical and eco-friendly, but it makes people fatigued easily. Electric motor car is a good choice, but it can’t sustain long-distance travel. Therefore, inventing a type of long-distance transport is urgent. The birth of Airwheel S5 solves such a problem successfully, which was published on Airwheel new product release conference last month. It has gained lots of praises because it sends out a strong sense of wildness and nobleness. According to the feedbacks from general consumes, Airwheel S5 enjoys a bright market prospect. The following will give detailed introduction into the king of SUV electric scooter-S5. 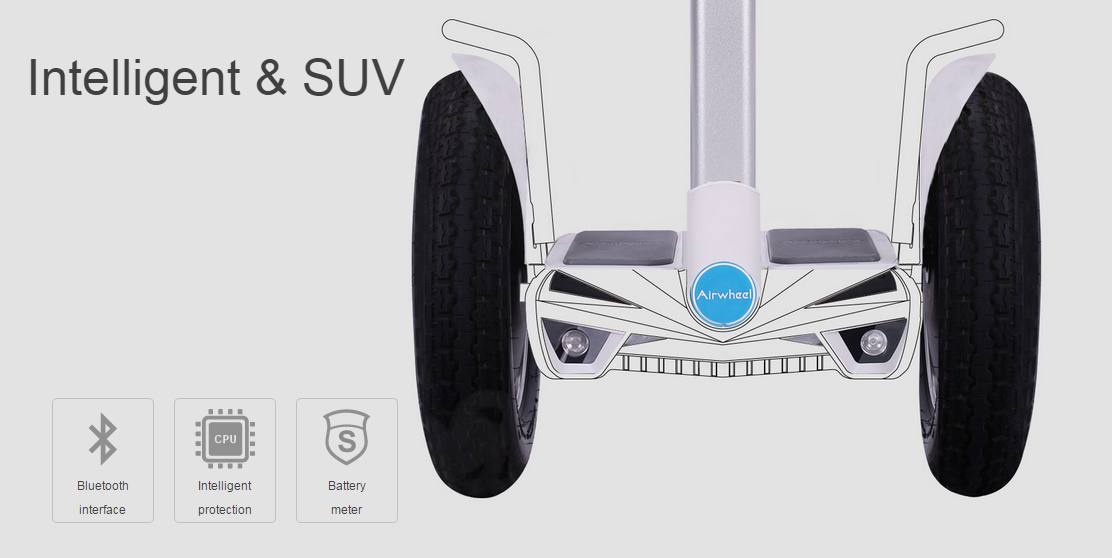 Like other Airwheel self-balancing electric scooters, Airwheel S5 still adopts high-quality Cheng Shin tyres. The obvious difference lies in 16-inch tyre size. Meanwhile, tyres’ pattern, width and thickness of S5 are specially designed for outdoor travels. It is able to challenge many rough road conditions, including desert, mountains and gobi. Different from S3 and S3T, Airwheel S5 is equipped with a fender, which is not only designed to prevent mud splash, but also used to install many fittings, such as toolbox, high-intensity light or camera and so on. Fordable rod is another highlight, which is helpful to pack up S5 and put it in the trunk. The reason why Airwheel S5 is hailed as SUV self-balancing scooter is because it is equipped with bigger battery capacity, longer range and tougher look when compared with other Airwheel scooters. For example, the used 680WH battery is the biggest capacity in the current market and it makes long-distance trip become possible. The built-in chips have been upgraded and it is good to optimize the comprehensive performance of S5.